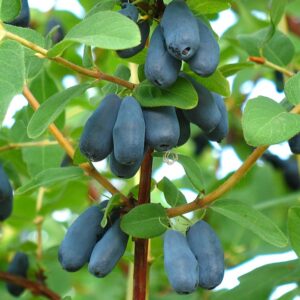 Historically, Haskaps have been used in traditional medicine for thousands of years by the people of Russia, Japan, Kuril Islands, China and other Asian countries.  Haskaps‘ therapeutic benefits were well known by the Japanese Ainu aboriginal people, recognizing the berry as the “elixir of life” It is believed that Haskaps have been used in folk medicine to reduce the risks of hypertension, glaucoma, heart attack, anemia, malaria, osteoporosis and gastrointestinal disease. The infusions prepared from the berries and other plant parts have been used as diuretic remedies, an antiseptic agent and for treatment of throat and eyes. Source: Journal of Functional Foods.

Haskaps are native to the northern boreal forests of North America, Asia and Europe and were initially introduced to Canada commercially as Blue Honeysuckle or Sweet Berry Honeysuckle and were widely used as an ornamental shrub and the berries were anything but sweet. In the late 1990’s, Dr. Maxine Thompson of Oregon State University, and Dr. Bob Bors of the University of Saskatchewan began breeding and developing Haskap cultivars with improved flavours and harvest traits that have led to the marketable fruit we have today.

The flavour of Haskap berries has been described as a mix of Raspberry and Blueberry, some say with a trace of Plum. When harvested correctly they are always described as delicious!

Haskaps are good for you!

According to The United States Department of Agriculture, some Haskap varieties have higher Vitamin C than oranges, strawberries, raspberries and blackberries.

A special thank you to: H.P. Vasantha Rupasinghe, Ph.D. Professor and Killam Chair in Functional Foods & Nutraceuticals, Department of Plant, Food, and Environmental Sciences, Faculty of Agriculture, Dalhousie University,for generously sharing his research with us. His full report can be read here