We have chosen the best tasting, highest quality and most productive berries we could find. Best of all, Black Currants and Haskap are full of Vitamin C, antioxidants and minerals!

Black Currants are often described as a “super fruit” due to its power packed nutritional benefits. Its flavour has been described as tart and intense and is most often processed into jams, jellies, sauces, liquor and juices.

At Plaid Shirt Farms we grow 5 varieties of Black Currants, chosen for their great taste, productivity and hardiness. The varieties are often blended for optimal results

Black Currants are available fresh in July or frozen and small batch processed into the finest, full-bodied preserves; jams/spreads, chutneys, sauces and juice, all bursting with bold flavours for you to enjoy.

Sweet, savory or spicy, tantalize your taste buds with our small batch products made with homegrown produce.

From 1840
Black currant jelly is excellent for sore throats; and if eaten freely on the first symptoms of the disease, will frequently check it, without any other remedy. It would be well for all families to keep it in the house. Source: Directions for Cookery, in its Various Branches (1840).

Historically, Haskaps have been used in traditional medicine for thousands of years by the people of Russia, Japan, Kuril Islands, China and other Asian countries. Haskaps‘ therapeutic benefits were well known by the Japanese Ainu aboriginal people, recognizing the berry as the “elixir of life” It is believed that Haskaps have been used in folk medicine to reduce the risks of hypertension, glaucoma, heart attack, anemia, malaria, osteoporosis and gastrointestinal disease. The infusions prepared from the berries and other plant parts have been used as diuretic remedies, an antiseptic agent and for treatment of throat and eyes. Source: Journal of Functional Foods.

The flavour of Haskap berries has been described as a mix of Raspberry and Blueberry, some say with a trace of Plum. When harvested correctly they are always described as delicious!

Haskaps are good for you!

According to The United States Department of Agriculture, some Haskap varieties have higher Vitamin C than oranges, strawberries, raspberries and blackberries. 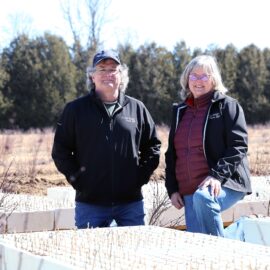 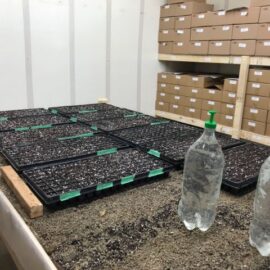 Time for us to plant this year's Habanero peppers for our Black Currant Habanero Jam and start some pollinator friendly flowers for our honey bees and bumble bees. Read more